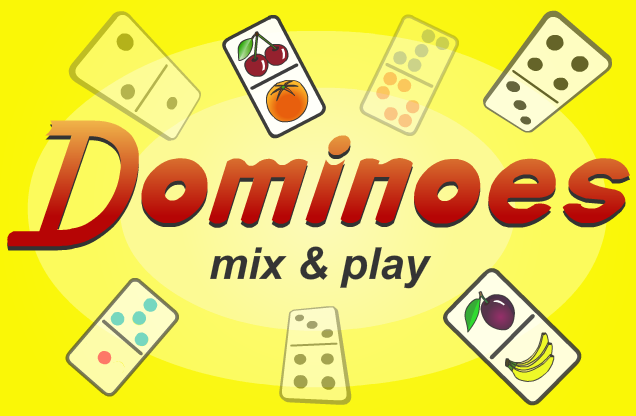 Enjoy the world's most beloved board game anytime and anywhere!
Domino tiles are very simple gaming devices, but the games that you can play with them are limited only by your imagination. There is a huge variety of domino games played all over the world, ranging from the very simple to the extremely complex.
Skills required: tactics, strategy.
ABOUT THE APPLICATION

THE BASICS OF DOMINO GAMEPLAY 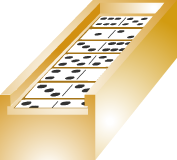 A domino is a small rectangular tile (commonly called a bone) with a line down the center. Each end of the tile contains a number. The most popular domino set is the double-six, the numbers vary from 0 (or blank) to 6. This produces 28 unique tiles. A domino tile is referred to by the number of dots (or pips) on each end, with the lower number usually taken first, e.g. "one-four", "three-six" etc. Domino tiles marked with two differing values are called singles. When both ends of a tile are marked with the same number, it is called a "double", e.g. a "double-one", "double-three". A double-six is the "heaviest" domino; a double-blank is the "lightest" domino value. Tiles that share a common number of pips on one end are said to be of the same suit, e.g. 1–0, 1–1, 1–2, 1–3, 1–4, 1–5, and 1–6 belong to the suit of one. Except for the doubles, each tile belongs to two suits. Larger sets are used to support more players or play more complicated games, e.g. the double-nine (55 tiles), double-twelve (91 tiles), double-fifteen (136 tiles), and double-eighteen (190 tiles).


General Rules
Rules and conventions for domino games vary in different parts of the world and between different players. There are no officially set rules. The following text describes rules that are common to most domino games.

Shuffling The Dominoes
Before a game or hand begins, the dominoes must be shuffled, so that no one knows the location of any given tile. Typically, the tiles are shuffled by turning them all face-down on the table, then moving them around in a random motion, being careful not to flip over any of the pieces. The shuffled domino-tiles are known as the boneyard.

Drawing Tiles
The number of tiles drawn from the boneyard by each player varies according to the game being played. Once the players begin drawing tiles, they are typically placed on-edge before the players, so that each player can see his own tiles, but none can see the value of other players tiles. Every player can thus see how many tiles remain in the other players hands at all times during gameplay. In some games tiles are left remaining in the boneyard which may come into play during the course of a game or hand.

Selecting The First Player and Placing The First Tile
The player with the highest double leads with that double. If no player has a double, the player with the heaviest domino in the highest suit (e.g. "six-five", "six-four" etc.) leads with that tile. The turn then rotates to his left. After the first hand, the winner (or winning team) of the previous hand begins by playing any domino in his or her hand. 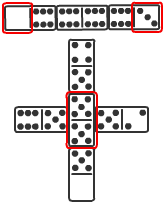 In most domino games, only the "open" ends of the dominoes in play may be used for placing subsequent connecting tiles with matching suit value on one end. An end is open when it has no other tile connected to it. Doubles are often set cross-ways with the long side connected to one of the short sides of an open tile. Usually additional tiles can only be placed against the long side of a double. However, some games consider all four sides of a double to be open, allowing tiles to be connected in all four directions.

Drawing Tiles During Gameplay
If a player is unable to make a move, he is going to do one of two things, depending on the game being played. In "block"* games or if there are no tiles left in the boneyard, a player must "pass". In a "draw" game, a player can draw a tile from the boneyard and play it if it fits or continue drawing until he can make a move or the boneyard is empty.

*In block games, players may not draw tiles from the boneyard during play.

Ending a Game
A game or a hand in a multi-round game ends either when a player plays all his tiles, or when no player is able to add another tile to the layout (the game is said to have been "blocked"). The winner is the player with the lightest hand (i.e. the number of dots on his dominoes). If there is a tie, the win goes to the player with the lightest individual tile. Scoring depends on the rules of the game being played. When playing a multi-round game, the score in each individual round (or hand) is added to the score in the previous rounds. When one player's total score exceeds a pre-established "winning score" the game is over and the winner declared.

THE RULES OF THE DOMINOES APP

The application is based on Draw Dominoes which is the most popular domino game and often referred to as simply "dominoes". The Dominoes app offers a variety of options to create different games, appealing to a wide range of tastes. Please find below the rules of Draw Dominoes and description of options available in the app.

Draw Dominoes Rules
After shuffling the dominoes, each player draws tiles. The number of tiles drawn depends on the number of players: Any remaining tiles are used as the boneyard (or "stock"). The player with the highest double leads with that double (6-6>5-5>4-4 etc.). If no player has a double, the player with the heaviest domino in the highest suit (6-5>6-4>6-3 etc.) leads with that tile. Players in turn lay tiles onto the open ends of the domino layout with same-number adjacent to same-number. An end is open when it has no other tile connected to it. Doubles are placed in the crossways orientation. If a player is unable to make a move, he must draw tiles from the boneyard until he can make a move. If there are no dominoes left, then the player must pass. A hand ends either when a player plays all his tiles, or the game is blocked with no player able to add another tile to the layout. The player with the lightest hand (i.e. the fewest number of dots on their dominoes) wins the number of sum total of points in all of his opponents hands minus the points in his own hand. If there is a tie, the win goes to the player with the lightest individual tile. 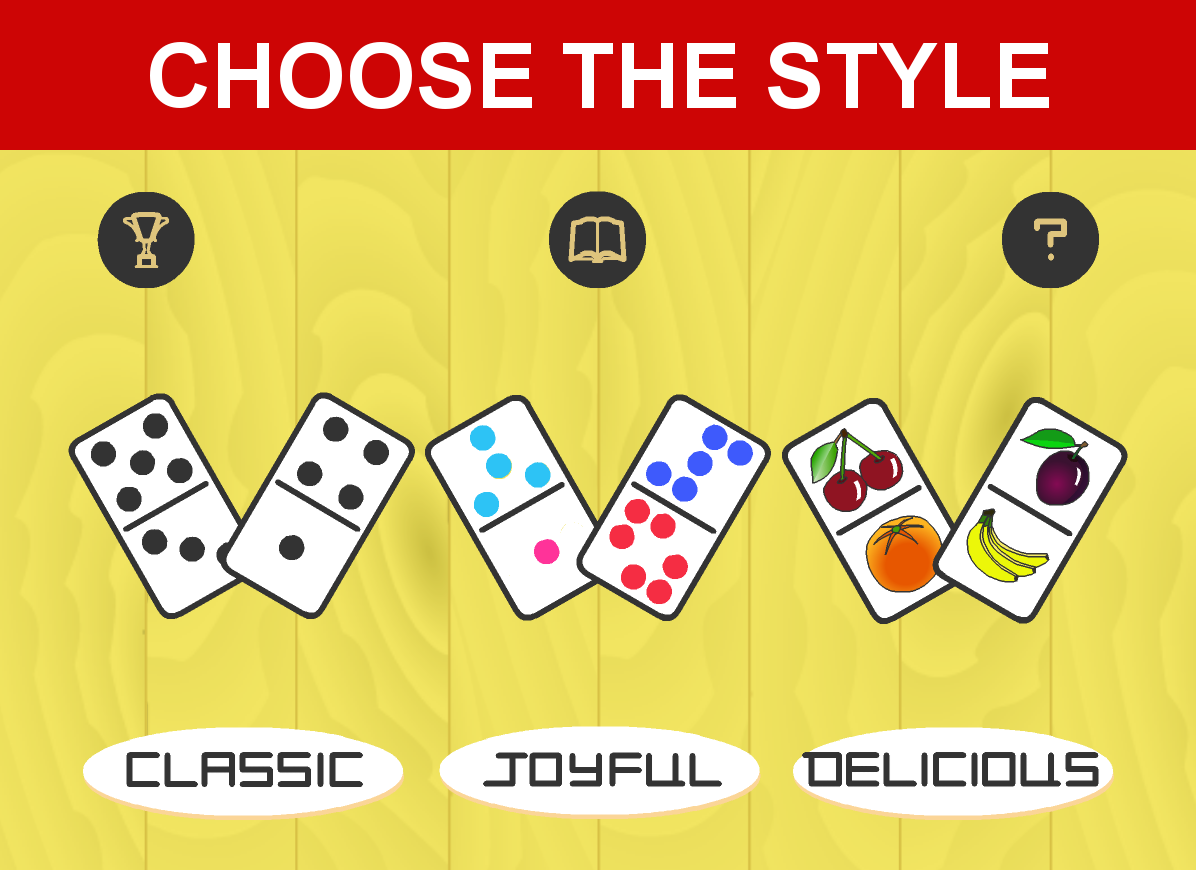